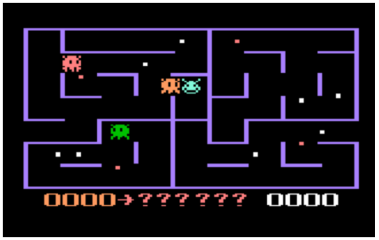 Munchkin is cartridge number 38 in the official Magnavox/Philips line of games for the Philips Videopac. In North America for the Odyssey² it was called K.C. Munchkin!, an inside reference to then president of Philips Consumer Electronics Kenneth C. Menkin.
Designed and programmed by Ed Averett, Munchkin is very heavily based on Namco's 1980 arcade game Pac-Man, but not a direct clone. It was however, similar enough for Atari to sue Philips and force them to cease production of Munchkin. Atari was exclusively licensed to produce the first play-at-home version of Pac-Man, but Munchkin hit store shelves in 1981, a year before Atari's game was ready.
Atari initially failed to convince a U.S. district court to halt the sale of Munchkin, but ultimately won its case on appeal. In 1982, the appellate court found that Phillips had copied Pac-Man and made alterations that "only tend to emphasize the extent to which it deliberately copied the Plaintiff's work." The ruling was one of the first to establish how copyright law would apply to the look and feel of computer software.

Click on the screenshot to run an in-browser emulation of the program.

My favorite thing about the game is that the maze disappears. I thought it would be impossible for me to play the game if I can't see the maze. I got used to it.